This is the first official bar that neither Mel nor Connie had ever been to. That being said, majority of our friends told us they have never even heard of it. So far, we were most excited to visit this bar.

On to Duck Island Club for #CLEabc! It's just a duck... chilling on a beach... under a palm tree. Who doesn't want to hang out here? 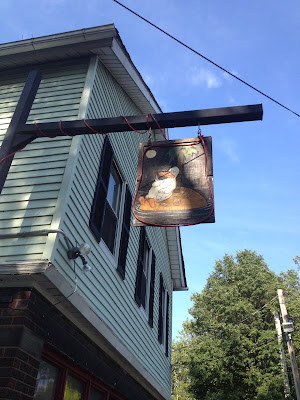 The most awesome thing about this place is that you would totally miss it if you weren't purposefully looking for it. They don't have a huge "Duck Island Club" sign, which is cool for peeps that love hidden treasures, but maybe not so cool for their marketing efforts. We have a feeling they like to keep it on the down low.

Marked with a handwritten sign that says OPEN in black marker on a red piece of paper, we stepped through the door unsure of what to expect. Immediately we felt we may be a little unwelcome coming in our business attire straight after work, but we were so incredibly wrong. We may have been the only patrons in the joint at 6 p.m. on a Wednesday, but they were extremely inviting and just fun to hang out with. 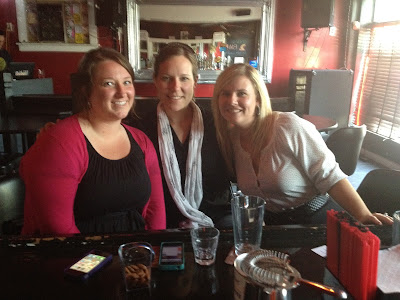 What we drank...
Happy hour at Duck Island Club means $1 off everything. No matter what you order. Connie had some PBR on draft and Mel got a Magic Hat. Three pints for only $6... not too shabby.


For our token "beers and menu" pic.. we had to improvise. Check out the artwork on this flyer! We may have to make it back for 80s Ladies Night at some point. 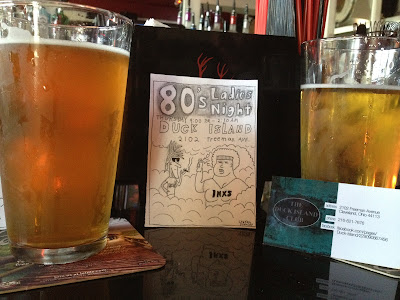 In addition to our brewskies... bartender Carrie (we'll get to her in a bit) offered to make us some house shots. (This is becoming a trend we could get used to.) A vodka fan, she put together a mixture of some sort of pink deliciousness. Bottoms up!! 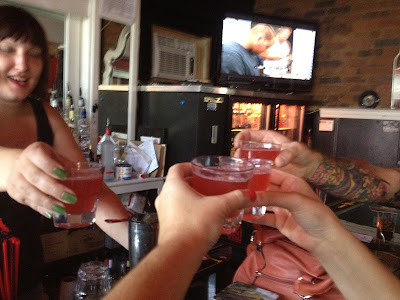 Carrie is eccentric, relaxed, cool and hip all rolled into one. Pretty sure she could spark up a conversation with anyone. AND she had PBR buttons... hard to top that. 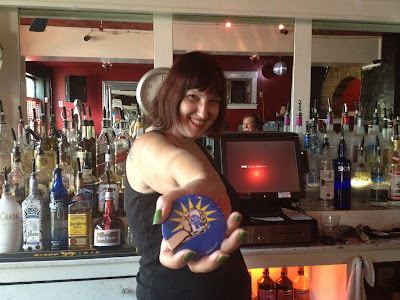 We also learned that Carrie spins vinyl. How cool is that?! Unfortunately, she explained to us that they've had some complaints in the neighborhood and the sounds of the vinyl is too loud. While we were there, her friend was helping to transfer some of her vinyl to digital so she could continue her mixes. Sad... would love to hear her spin some vinyl one day.

CHILLIN OUT, MAXIN, RELAXING ALL COOL
Duck Island Club prides themselves on being a place where you feel like you are getting drinks served to you in your own living room. True, but you must have a kick ass living room if you have an old school Pac-Man game and skee ball. 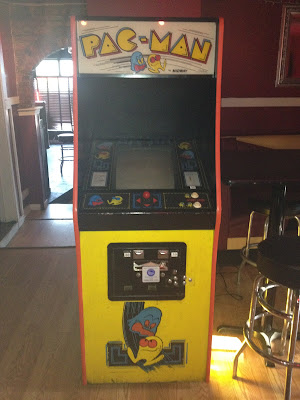 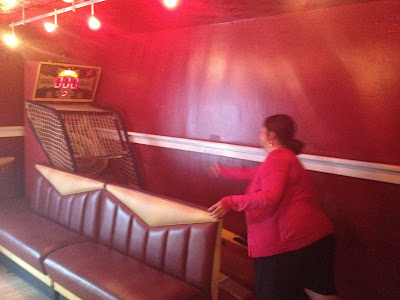 This place has an amazing hip, artsy vibe. Just check out these vintage booths in the back room! And yep, that's an old cigarette machine in the corner too. 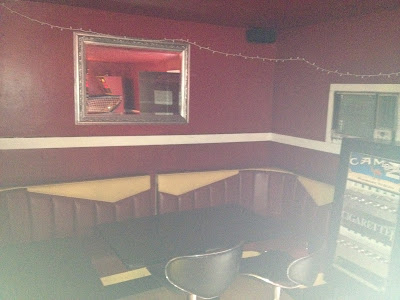 That's not all... there is even a patio. 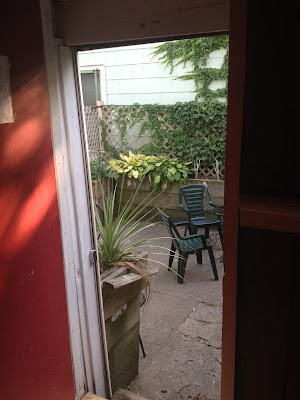 And we haven't even talked about the disco ball against the exposed brick. 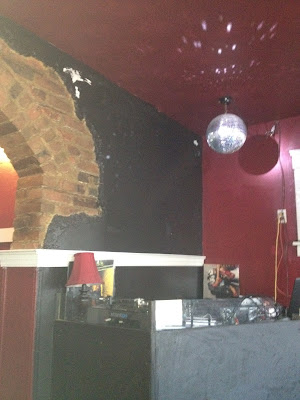 Clearly, you can see why this is a perfect Tremont destination. They mentioned being open and participating in the Tremont Art Walk and even bringing back mixed tape parties! We almost don't even want to share this place with others. We plan to go back...often.


KID AT 2104
We would be remiss if we didn't warn you about the naked kid running around the yard in the house next door to the bar. As we walked up, he ran up to the fence from out of nowhere and yelled at us... causing Mel to scream out loud. We kept walking... Then our first (and probably only) groupie, Andrea, joined us. The first words out of her mouth were talking about some naked kid asking her about his stick... um.... yeah, watch out for him.


The FOOD!
The only bad thing about Duck Island Club (besides the creepy neighbors, but that's part of the adventure) is the fact there is no food. They do have a nice assortment of nuts (no comment), but that just wasn't going to cut it. We failed to find a quick D place to run to for dinner (and Domino's doesn't deliver to Duck Island... we checked) so we opted for an early E -- Edison's Pub. 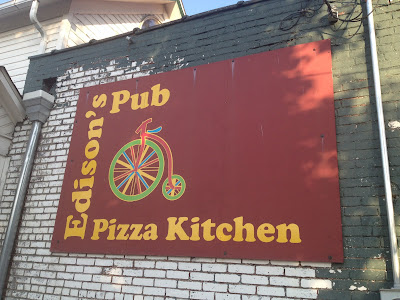 Not sure you can consider yourself a Clevelander if you've never been to Edison's Pub for some brews and pizza. (Well... at least brews). This is the place to go late night in Tremont after having a few (or lots) at a local watering hole. 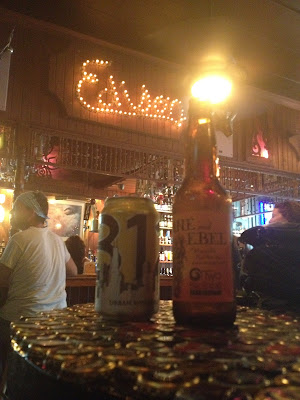 We quickly grabbed a medium pizza with pepperoni & banana peppers... yum!! They even add a side of honey to dip your crust in. (Waaay better than it sounds, just ask Connie.) 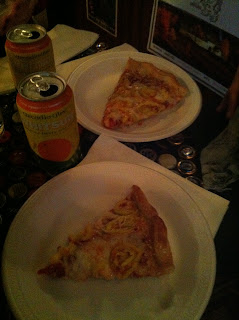 And we just love their beer bottle table tops. Wonder how long it takes to make one of these bad boys. 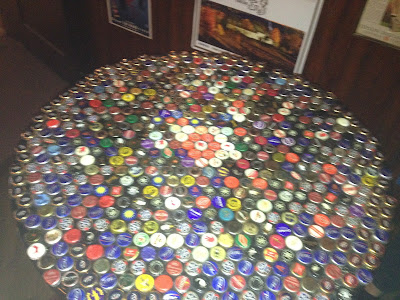 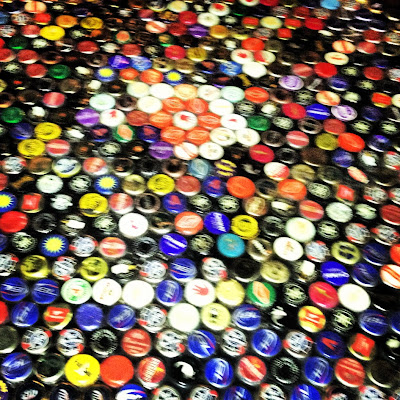 This probably won't be our last visit to Tremont. We still have 22 letters in the alphabet to go. Which brings us to our next topic...

Not sure where we should head for our full out E adventure. Our list so far includes:

Or maybe we'll just consider Edison's our E and call it day. On to F??

Help... where should #CLEabc go?